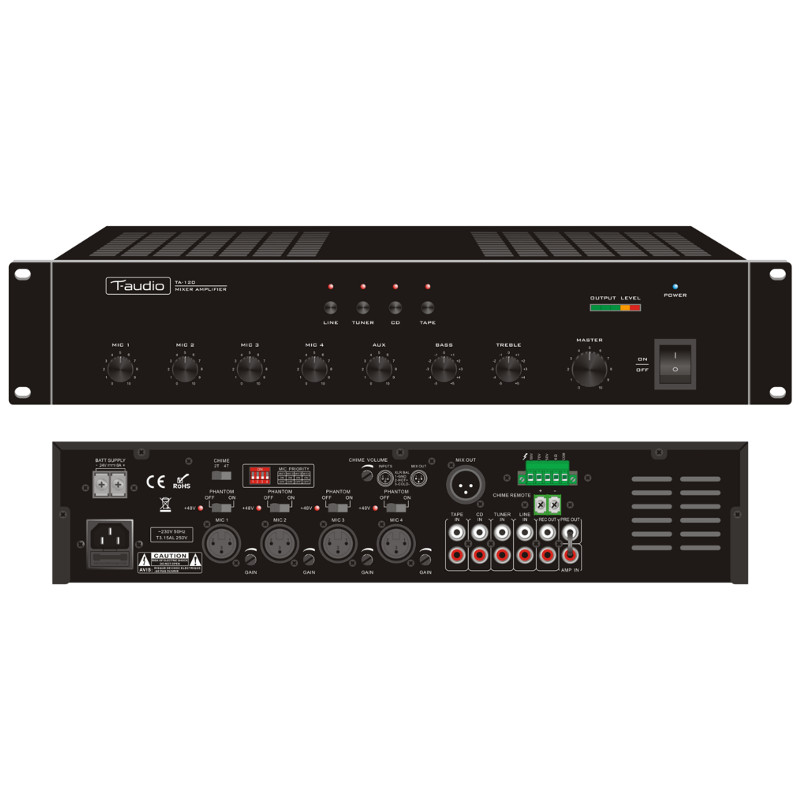 The TA-120 is a mixer amplifier and part of the TA series. This mixer amplifier has a wattage of 120 and is furnished with all options (like bass, treble, gain and volume control), for a very sharp price. The amplifier is ideal for use in shops, offices and in the food service industry, for instance. The TA-120 can also be applied to churches and schools, among others.

The TA-120 is equipped with four universal balanced XLR mic inputs with Vox priority switching. Because of this, the required mic input can receive priority over all other inputs of the amplifier. A built-in chime function provides an optional two or four tone signal, to be played before making an announcement. The mic inputs are supplied with gain control and phantom power, which can be enabled/disabled. Four Aux dual RCA line inputs serve for connecting virtually any music source imaginable. Furthermore, the amplifier has four XLR balanced line outputs and a REC output for connecting a recorder. The PRE output and AMP input make it possible to connect an external mixer. Lastly, the amplifier is equipped with a MIX out, to optionally connect a power amplifier.

All in- and outputs are situated on the back of the amplifier. On the front, the control panel can be found. With this, the master volume and the volume of the individual mic inputs and music sources can be controlled. The music sources can be selected at the front as well, using buttons, each equipped with LED indication. In addition, rotary knobs are present for control over the bass and treble. An on/off button and output level meter are also situated on the front. To prevent overheating, the amplifier is furnished with thermic protection and convection cooling for efficient heat dissipation. As an added advantage, no fan is needed, which makes the amplifier much quieter. In addition, the amplifier is also protected against short circuit, overloading and it comes with a current limiter.

The TA-120 can be used as a standalone amplifier. Using the included brackets, it is also possible to install the amplifier in a 19” rack, occupying 2U. The TA-120 can be powered with 230 volts AC or 24 volts DC, offers a wattage of 120 and can be used for 70 or 100 volts and Low-Z audio installations. These mixer amplifiers are used in, among others, shops, offices, churches, schools and the food service industry.

Looking for an amplifier with more power? For this, T-audio offers the TA-240. This amplifier delivers a wattage of 240, is fan cooled and also differs in dimensions and weight. Other than that, the amplifiers are identical. The NPDK-372 paging microphone can be connected to the TA mixer amplifiers to make announcements.